Pre Jym vs Pre Kaged: Are You Taking The Best Choice? 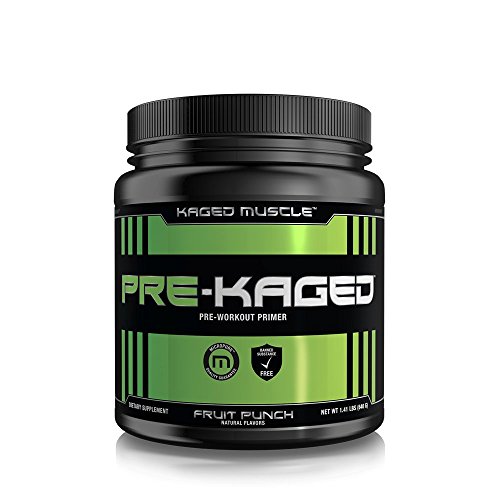 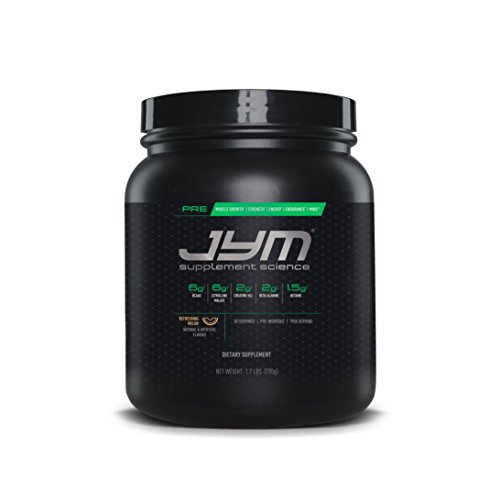 With an almost identical brand name and a strikingly similar ingredient list, it is no wonder we are interested in comparing Pre Jym vs Pre Kaged.

After reviewing each supplement individually, it became clear that there were some significant differences that we haven't seen anyone talks about...yet.

So, which do we prefer?

Table of Contents
What Are The Main Differences?
Which Is The Strongest Supplement?
Should I Take Pre Kaged Or Pre-Jym For Muscle Growth?
Ingredient Breakdown
Taste And Flavors
Sizes, Servings, And Scoop
Who Should Go With Pre Kaged?
Who Should Go For Pre Jym Instead?
The Verdict

What Are The Main Differences?

While not quite as impressive in the focus and muscle recovery departments, no serious lifter can deny the motivational feeling of having an intense, skin-splitting pump during sets of their favorite exercise.

On the other side of the coin, we rate Pre JYM more highly than its competitor for sharpening focus, prolonging endurance, and repairing muscle.

With higher doses of caffeine, beta-alanine, and creatine, we feel that it covers the performance-boosting ingredients more thoroughly. Despite not tasting as pleasant as Kaged Muscle's offering, the BCAAs are dosed in the optimal 2:1:1 ratio, unlike their competitor.

Which Is The Strongest Supplement?

Usually, when someone asks us the question "what is the strongest pre-workout supplement?", they want to know which has the highest caffeine, and which makes them feel the most energetic.

Although we believe that there's much more to having a great workout than just caffeine, go with Pre JYM if you want the most significant buzz possible.

Should I Take Pre Kaged Or Pre-Jym For Muscle Growth?

Being naturally responsible for starting protein synthesis, BCAAs are by far the most critical ingredient for muscle growth when it comes to pre workouts.

Citrulline has its place too, but more regarding reducing soreness, not actually stimulating muscle growth.

Although Kaged (6.5g) contains more BCAAs than JYM (6g), we think that it's worse for muscle growth. Why?

Yes, you do get extra leucine (3g), which is a crucial player in growing new muscle, but without the proven ratio being in place, additional amino acids are not worth it.

More on this in a bit.

For each key ingredient shared by the supplements, I'll explain why you should care about the benefits, and reveal which product has the best ingredients overall, based on our testing.

Although it has an extra 0.5g of citrulline on its rival, it’s worth noting that Pre Jym doesn't actually use regular citrulline.

Instead, it utilizes a combination of citrulline and malic acid, which is commonly called citrulline malate and is likely better than the regular stuff for reducing muscle soreness.

While malate is probably better for muscle growth and training performance, there's not a whole lot of difference on the pump side of things. However, because malic acid makes up some of the 6g doses, Pre JYM has quite a bit less citrulline than Pre Kaged.

You care mostly about strength?  Go With Pre JYM

Want to get the best pump possible?  Go for Pre Kaged

Compared to Kaged Muscle's 1.6g offering, Pre JYM has a full 2g of beta-alanine — the “endurance amino acid”. Or, to put it another way, you get an extra 25% beta-alanine by going with JYM Supplement Science.

It won't turn you into the next Mr Olympia, but adding beta-alanine into your pre workout cocktail can help you squeeze out extra reps, by increasing your lactic acid tolerance.

And as Arnie would say, the last reps are the ones that really count!

In the quantity department, sure. But as the old saying goes, it's not about quantity, it's about quality, and nowhere is this more accurate than in the supplement industry.

Don't get me wrong, I'm not saying the BCAAs in Pre Kaged is bad, but because they're not in the proven 2:1:1 ratio, they come up short compared to Pre Jym's formula.

With either supplement though, you certainly won't be needing any intra workout aminos.

Compared to regular monohydrate, only a small dose of creatine HCL is needed for us to get all the benefits. If you've ever taken it before, you'll know how well it mixes in water compared to the standard stuff.

It's also no surprise to learn that it's more easily absorbed by the body.

Although only a small dose is needed, we still want a sizeable amount to enjoy its best effects in the gym. While it has a moderate 1.5g dose, Pre JYM boasts a full 2g, which doesn't seem like much difference until you look at things from a percentage angle.

Pre Jym has 25% more creatine than its competitor. But how about the other strength-booster, betaine?

Despite coming up short in the creatine department, Pre Kaged somewhat makes up for the letdown with a 2g betaine dose.

However, research on the benefits of betaine is mixed. Some studies find a nice increase in muscle power and growth, whereas others find no significant benefits to taking it.

Does this make-up for the lower amounts of creatine?

Pre Jym is still our recommendation if strength, rather than the pump, is your primary fitness goal.

Despite Jym Supplement Science offering slightly more flavor options, we preferred the taste of Pre Kaged, although neither is anything to write home about as far as flavors go.

Pre Jym has a strong, pungent, but fruity taste to it. But with so much powder to mix, at times, it can feel like a chore to drink if the flavor doesn't hit the spot.

On the other hand, Pre Kaged also has a strong, but nicely sweet taste to its powder, which again, is very dense and requires a fair amount of liquid for best mixability. We found the flavor to be really concentrated, which can take you by surprise if you don't use a liberal amount of water.

Once we got the mixing spot on through, Krisp Apple really began to get its name on the flavor scoreboard. It was indeed on the sweet side, but not so intense that you feel like a kid trying chocolate for the first time.

Aside from the aroma of the powder, the first thing I noticed when opening the tub for the first time, was the sheer size of the scoop. Roughly speaking, it's about the same size as a protein powder scoop, which might seem odd for a pre workout, but its size is just to house the ingredients.

There's 20 serving per tub, which admittedly, is a little below average based on the other products we've tried. However, Pre kaged is a much more sophisticated supplement than your average grocery store pre workout, which usually requires at least 2 scoops to get the job done 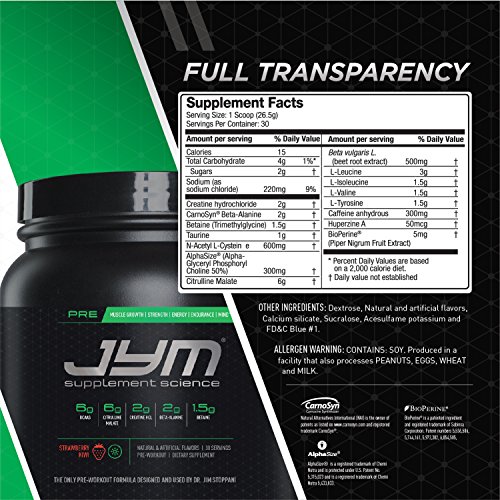 While not quite the mass monster of Pre Kaged, the scoop is still huge (for a pre-workout) and the powder very dense, weighing only 12.5g less than their protein powder, Pro Jym.

The size difference is noticeable right away. Pre JYM is smaller than Pre Kaged, which might sound like a trivial difference, but it's something worth considering for those who want to bring it in their gym bag.

It also has 2 sizes options, which is useful for those who don't want to commit to a large batch without trying it out.

Who Should Go With Pre Kaged?

Go with Kaged Muscle for a better tasting, and a more hydrating kickoff to your workout. With considerably more l-citrulline, you can expect extra blood flow to the working muscles, giving them a more potent pump and vigorous vascularity.

Having been third-party tested & certified by Informed Choice we feel that Pre Kaged is an excellent choice for those seeking an extra layer of trust and authencity.

Who Should Go For Pre Jym Instead?

Go for Jym Supplement Science to enjoy a deeper focus and a more solid foundation of ingredients. With 6g of BCAAs in the scientifically-tested 2:1:1 ratio, you will save money on intra-workout nutrition, while also protecting your muscles from potential catabolism.

Go With Pre JYM if you want to improve recovery, strength, and endurance more than you want a muscle pump.

Having 25% more beta-alanine than its competitor, it is an excellent choice for those who value high rep training in the gym. The taste could use some tweaking, but with a solid overall nutritional profile, it is only a mild inconvenience for the serious lifter.

Overall, we are pleased with both of these pre workout supplements. Packing more punch than your average store-bought pre-workout, we believe that anyone looking for more energy in the gym, or on the field, can benefit from these products.

However, the best option for you depends on what you are looking for.

Those who will enjoy the best effects of Pre kaged are those seeking the best pumps and most robust mind-muscle connection.

Those who will get the most out of Pre Jym, are those who are more interested in strength and endurance rather than the best pump. It also has slightly more caffeine than Pre-Kaged, which may improve focus more.

I hope you enjoyed our Pre Jym vs Pre kaged comparison, and hopefully, it helps you to decide which supplement to go for. If you want your new supp to arrive in time for your next workout, then consider signing up to Amazon Prime.

Jonathan Abbott
Jonathan is a long time fitness enthusiast who specializes in helping others reach their goals faster with the most up to date sports science. When he's not working, you'll find him challanging his body with heavy squats and deadlifts.

2 thoughts on “Pre Jym vs Pre Kaged: Are You Taking The Best Choice?”

As an Amazon Associate I earn from qualifying purchases.

The information contained on Vitalrepz.com is intended for informational and educational purposes only. Any statements made on this website have not been evaluated by the FDA and any information or products discussed are not intended to diagnose, treat, cure or prevent any disease or illness. Please consult a healthcare practitioner before taking supplements that may interfere with medications